PM among first group in Australia to get COVID jab

PM among first group in Australia to get COVID jab 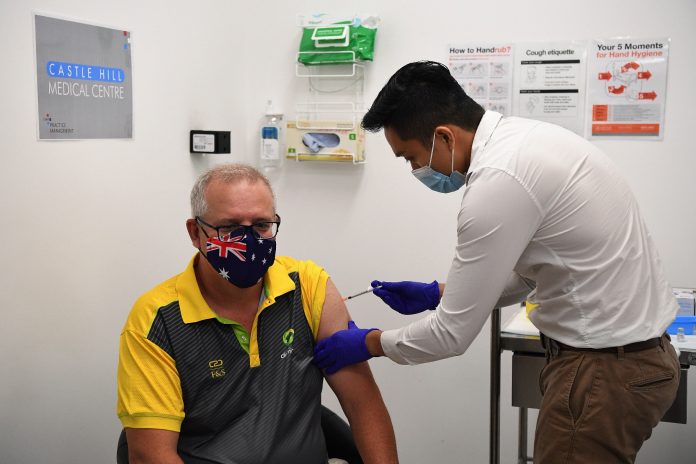 Australians may not receive their first COVID-19 jab by the end of October as initially planned, with the federal government advising those under 50 More
More
News

Leaders from across Australia will meet to draft a national plan to improve women's safety in July, as calls for better funding for frontline More
More
News

Economists expect the Reserve Bank will keep its interest-rate settings steady, although will be keen to hear its views on housing, which is experiencing More
More

Scott Morrison has become one of the first in Australia to get a COVID-19 vaccination, describing it as a ‘curtain raiser’ to the national rollout which starts on Monday.

But heading the vaccination queue was aged care resident Jane Malysiak, 85, who survived World War II in Poland as a child before migrating to Australia.

“This is a curtain raiser,” Mr Morrison told reporters on Sunday.

“Tens of thousands of people will be coming in tomorrow, and I wanted them to know as they went to bed tonight that we have been able to demonstrate our confidence in the health and safety of this vaccination.”

The rollout more broadly commences on Monday, targeting health and border control workers, aged care residents and their carers in the first phase.

Health Minister Greg Hunt confirmed that he and the head of the Department of Health and former chief medical officer Brendan Murphy will get the alternative AstraZeneca jab when it becomes available at a later date.

Donned in his Australia flag face mask and preparing for his injection, Mr Morrison said: “I’m ready to go, just like the country,.”

“You all thought there’d be tatts there, didn’t you?” he quipped as the arm of his T-shirt was lifted to deliver the jab.

Mr Hunt told ABC’s Insiders program he wants as many as people as possible to be vaccinated, but declined to put a figure on what percentage he wanted to see.

“We’ve provisioned so that … every Australian has access to vaccines. We’ve secured 150 million doses of a range of vaccines,” he said.

The first jabs came after hundreds of people took to the streets on Saturday to protest against having the vaccination.

Even so, according to an Australian Bureau of Statistics survey, almost three quarters of Australians said they would get the vaccine.

There were no locally acquired COVID-19 cases reported across the country on Sunday, but there were three infections in NSW quarantine, two in South Australia and one in Western Australia.

In Victoria, the Andrews government announced $143 million in relief for businesses unable to operate on Valentine’s Day during the state’s five-day lockdown.

Meanwhile, the one-way travel bubble with New Zealand resumed on Sunday which allows people to travel to Australia without having to quarantine for 14 days.

But if they have been in Auckland in the two weeks before departing, they will need a negative coronavirus test. That condition will remain until March 1.

Qld vaccinations to start and restrictions to ease

Queensland’s COVID-19 vaccine rollout is set to begin, with 100 frontline health workers on the Gold Coast to receive the state’s first jabs.

And the state’s chief health officer says remaining restrictions on residents are likely to change as a critical mass of people become vaccinated.

Workers at the Gold Coast University Hospital will receive their first Pifzer vaccine on Monday, followed later in the week by workers at Brisbane’s Princess Alexandra Hospital and then workers in Cairns.

About 1000 people would be vaccinated in the first week of the rollout.

Premier Annastacia Palaszczuk said the first phase of the vaccine rollout in Queensland would cover about 125,000 people – about 37,000 in the hotel quarantine system and 88,000 in care settings.

The next phase would include one million Queenslanders including those aged over 70, all healthcare workers, Indigenous Australians aged over 55, Queenslanders with a disability and emergency service teams.

All adult Queenslanders will be vaccinated by the end of October and Ms Palaszczuk implored her state’s residents to remain patient.

“This is to ensure that we get the vaccine out to where it’s needed the most, our frontline hotel quarantine workers and for the Commonwealth, aged care workers and residents,” Ms Palaszczuk told reporters on Sunday.

“We’ll be keeping you updated every step of the way so there’s no need to panic – we don’t have any community transmission in Queensland.”

Six hubs in north and south Brisbane, the Gold Coast, Sunshine Coast, Townsville and Cairns will administer the vaccine.

All COVID-19 vaccines are free to all people in Queensland.

Dr Young reiterated a second vaccine shot would be required 21 days after the first for the Pfizer jab, or 12 weeks later for the AstraZeneca vaccine.

“It’s clear this vaccine will stop you getting severe disease and dying and that’s what we want from a vaccine, the first thing we want,” Dr Young said.

Dr Young said that once a critical mass of Queenslanders had received the vaccination, remaining restrictions would likely change.

“It won’t change anything tomorrow morning of course, but as we get more people vaccinated, it will change how we manage things.”

Ms Palaszczuk also said talks were continuing with the federal government on a purpose-built quarantine camp near Toowoomba.

There is a ditch between us, but Australia and New Zealand are bonded and bound. Trade, tourists, a language – kind of – as well More
More
National

Australia has abandoned meeting a fixed timeline for its COVID-19 vaccination rollout. An initial target of October has proven unachievable due partly to dosage import More
More