'Blocks for $20k': the building frenzy that put the Sunshine Coast on national property map 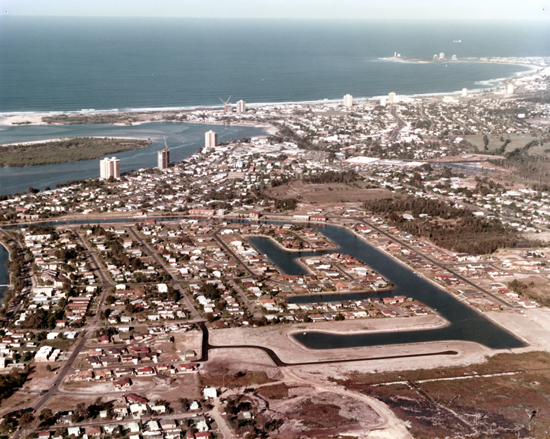 While the building blocks went down in the 1970s, the Sunshine Coast as we know it took shape in the 1980s, when there was a building frenzy to exploit this new pot of real estate and tourism gold.

The region had been gaining impetus during the 1970s, and by 1980 it was shucking off its veneer of country cousin and stepping on to the national stage as a beautiful but relatively undeveloped area on the brink of big things.

It was finding its place on the map.

The three local councils were swamped as applications flooded in to provide housing in all forms – subdivisions of all sizes, canal developments, and beachfront apartments from six-packs to medium and high-rise towers.

Inevitably, there were growing pains and town planning was introduced to the landscape to cope with them.

When Maroochy Shire gazetted its first town planning scheme in 1973, it was the first on the Sunshine Coast.  After much to-ing and fro-ing it had 17 zones to cater for residents, business, industry and landholders.

It also introduced height controls on tourist development in 1980, which led to bitter disputes between developers, councils and citizens fearing the consequences.

The State Government, if called in to over-ride council decisions, usually came down on the side of the development industry with “ministerial rezonings”.

It was the Bjelke-Petersen era and Russ Hinze was known as the Minister for Everything, Local Government among them.

The Gold Coaster who made little secret of his white shoes, wasn’t overly sympathetic to the cries of “no more high-rise” and “this is not the Gold Coast” that prevailed through the ’80s.

In 1981, Noosa Shire valuations showed an overall rise of 188% with Noosa Heads accounting for the largest share.

The maxim “build it and they will come” prevailed and by 1996, the Sunshine Coast was the 12th largest community in Australia after growing at a rate well above the national average for more than 30 years.

By 2019, our population was 346,522 and rising, making the Sunshine Coast the ninth most populous city in Australia.