After fighting most of his life to live, triplet Noah Tarabori is going to school 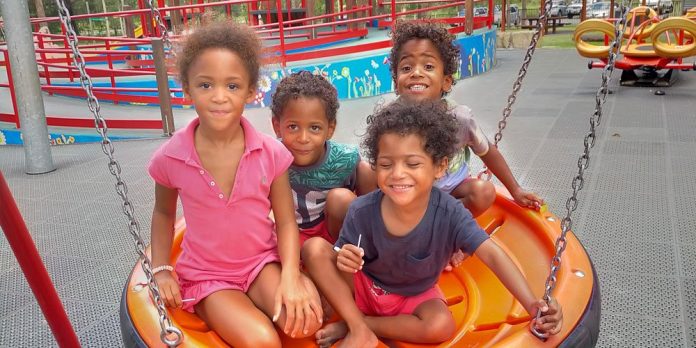 A brave Caloundra boy is embarking on a new adventure thanks to his fighting spirit and extraordinary mum.

The first day of school is a significant milestone for all children, but for some, it’s extra special.

Five-year-old Noah Tarabori is a triplet who was born at 28 weeks with life-threatening health problems and spent 263 days on life support at Wolfson’s Children’s Hospital in Florida, USA.

Described by his mother as a little rockstar, Noah has fought every day of his short life to arrive at the day when he will front up to Prep, still fed by a PEG tube, to start school on January 27.

Eileen Tarabori is a single mother to her four children, Domenica, eight, and the triplets, Noah, Kai and Aris.

Originally from Sydney, she spent 15 years living in the US before Noah’s health challenges necessitated a move back to Australia to pursue the best medical care possible.

A year ago, they began their new life on the Sunshine Coast, moving here for the great weather and easygoing lifestyle.

When the children begin school, Ms Tarabori plans to go back to university and study social work and occupational therapy, but it won’t be the first time she has undertaken a new career challenge.

After gaining bachelor degrees in social science and early childhood education, she left Australia to teach English and social science around the world, eventually taking on a job as principal of a school in Phoenix, Arizona. When she felt she needed a break from that, she joined the US military.

Incredibly, Ms Tarabori served over a decade in the US Army as a paratrooper with the All American 82nd Airborne Division at Fort Bragg, North Carolina and support with the Seventh Special Forces Group out of Eglin Air Force Base, Florida.

“I was in combat a total of four times in the Middle East and South America,” she says.

After serving from 2006 to 2016, Ms Tarabori was discharged due to PTSD, traumatic brain injury and injuries suffered during a parachute malfunction while training for her fourth deployment.

“I have a strictly military-type PTSD,” she says. “You get flashbacks from being deployed and doing certain things that are not normal. We’re not raised in a hostile environment, so when you’re put in one for such a long period of time, for 12 months or more, you see things and do things you’re not raised to see and do.

“There’s a lot of conflict in your mind about doing the right thing. Taking a person’s life is not normal.

“When you’re in the military and in a combat zone, that’s your job and you have to be okay with that. You see a lot of gun violence and bombs. You see death, you see your fellow members in situations you don’t want them to be seen in.

“You’re shooting at people, they’re shooting back at you, you have to fight for your life. It’s a life and death situation for such a long period of time that when you come back, you’re struggling ethically, morally and mentally with what you’ve seen and done.

“You think about what you could have done, what you should have done. You’re in a constant battle with your brain – the noises, screams, smells, they all bring on the flashbacks.

“Gunfire sounds similar to cars backfiring or firecrackers going off, so you feel anxiety, your heart rate goes up and you think, am I okay? It doesn’t go away; it stays with you for a very long time.”

Ms Tarabori describes the training she went through as intense, saying only 50 women compared with 500 men made it into the special forces while she was there.

“To be in the special forces, you have to be one of the most elite soldiers there is. We train all day, every day for hours upon hours. We get up at 4am. At 4.30am you’re up in formation, you’re doing your PT (physical training), which could consist of going to the gym, a 10-mile run, doing weights, carrying all your gear on you, going on drill missions, jumping out of planes.

“You have to pass all the fitness tests. You have to have a strong mind and a lot of endurance. There is no male and female; you’re one. You have to be equal to the men, carry the same load and jump out of the plane at the same time.”

“Ms Tarabori was stationed in Florida when she had her first child in 2013 through a sperm donor from Guyana. Having had fertility problems, she’d frozen her eggs when she joined the military with the aim of pursuing IVF at a later date.

“When the triplets were born in 2015 (from the same donor), she was in line to be medically discharged from the military and says she knew as soon as Noah was born, weighing only 820 grams, she’d return to Australia.

“Aside from extreme prematurity, Noah was born with numerous congenital conditions, including oesophageal atresia (being born with his oesophagus not connected to his stomach), chylous ascites (fat in the peritoneal cavity), brain bleeds, bronchi pulmonary dysplasia, cerebral palsy and craniosynostosis (early closing of his skull sutures) and VACTER syndrome. He is also PEG fed.

“During his stay in the neonatal intensive care unit, he had countless surgeries, including a feeding tube at four days old, a craniotomy, oesophageal repair, two hernia repairs and ascites fluid drains,” says Ms Tarabori.

“He needed to be revived with CPR-chest compressions three times and has been fighting for his life from day one.

“He has been astounding throughout the entire courageous fight and his amazing recovery. After the oesophageal repair in January 2016, Noah fell into a coma and cardiac arrest and was placed on life support. His right lung collapsed and two chest tubes were placed to drain blood and fluid.”

Ms Tarabori says Noah’s recovery is thanks to countless hours of physical, occupational and speech therapy, which is what has motivated her desire to study in this field at a tertiary level.

“Noah is even finally starting to take on soft food and on January 27, he will embark on his biggest achievement to date – starting Prep at Golden Beach State School,” she says.

“This is a day which was always a goal and highly anticipated. I’m so proud of this little guy. He’s my hero and inspiration. Although there are many more hurdles to overcome, the heartfelt support from this community has been embracing, to say the least.

“We have been welcomed and supported by the staff at Talara Early Childhood Development Program, Bush and Beach Kindy, Beyond Words therapy and now Golden Beach State School in giving Noah the best academic start possible.

“I will have to go in to school and feed him via his tube once a day. Up until two weeks ago, we weren’t even sure he was able to go to school. All four kids are getting a bit nervous about starting school, but once they settle in, they’ll be fine. They’re very resilient.

“Noah has definitely helped me along my own personal journey with PTSD and he has been my rock in recovery. I am so proud to be the carer and mum of this amazing boy who fought against impossible odds to be with us today.”