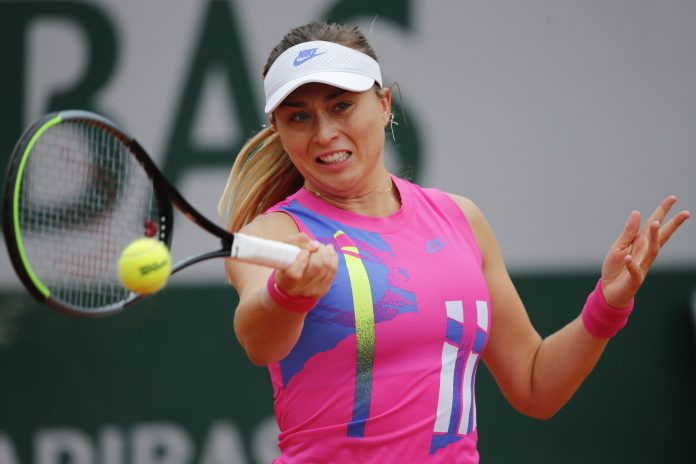 Rising Spanish star Paula Badosa has become the first Australian Open player to announce she has tested positive for COVID-19 ahead of the season’s first grand slam.

The 23-year-old has been isolating in Melbourne under the mandatory 14-day quarantine rule after a tournament-chartered flight from Abu Dhabi on which two co-passengers also subsequently tested positive.

Badosa said on social media on Thursday that she had been feeling unwell and had been moved to another “health hotel” to recuperate.

The world No.67 went on Twitter to say: “I have some bad news. Today, I received a positive Covid-19 test result.

“I’m feeling unwell and have some symptoms, but I’ll try to recover as soon as possible listening to the doctors.

“I have been taken to a health hotel to self-isolate and be monitored. Thanks for your support. We’ll be back stronger. Paula.”

A total of 72 competitors have been confined to their hotel rooms before the tournament that starts on February 8.

On Wednesday, officials had reported that 10 people who travelled to Australia for the tournament had tested positive.

Yet some of those were likely to be viral shedding, where someone still has the virus in their system but is no longer contagious..

Yet the New York-born Badosa is still the only competitor to be named as an active coronavirus case.

She has precious little time to recover and to be fit for the event after looking forward to making it the starting point for another rise up the rankings in 2021.

Badosa had ended 2020 by making huge strides, reaching the last-16 at the French Open and reaching a career-high ranking.

She is due to compete in her third Australian Open, having reached the second round last year before being knocked out by Petra Kvitova.

Meanwhile, the Spanish tennis federation (RFET) called on Tennis Australia to relax the restrictions affecting two of its other players, saying they could cause “psychological damage”.

Qualifiers Mario Vilella Martinez and 17-year-old starlet Carlos Alcaraz have been among those isolating in their hotel rooms.

In a statement, the RFET said the pair weren’t aware they would have to undertake strict quarantine without the daily training breaks that had been negotiated – something that has been categorically denied by tournament director Craig Tiley.

The statement read: “It is clear that these two players will not be able to compete on equal terms with the rest of the players.

“And it is not only a competitive problem of this first grand slam. The issue is that their season could be severely damaged by a 14-day lockdown.

“The affected tennis players are elite athletes who need to stay active to be able to perform and not to get injured.

“Not to mention the psychological damage that affects the athlete in a sport in which the mental facet is so demanding.

“For all these reasons, from the RFET, we ask Tennis Australia to try to solve the problem of the most affected tennis players.”

Meanwhile, leading Brazilian umpire Carlos Bernardes, who was due to be officiating in Melbourne, is recovering after being taken to hospital on Wednesday, having reportedly suffered a heart attack during quarantine.

The ATP reported: “Following admittance to hospital (non-Covid related) on Wednesday in Melbourne, we are pleased to report that ATP Umpire Carlos Bernardes is recovering well.”