After six seasons with Firebirds, Cassidy wants to stamp her authority with Lightning 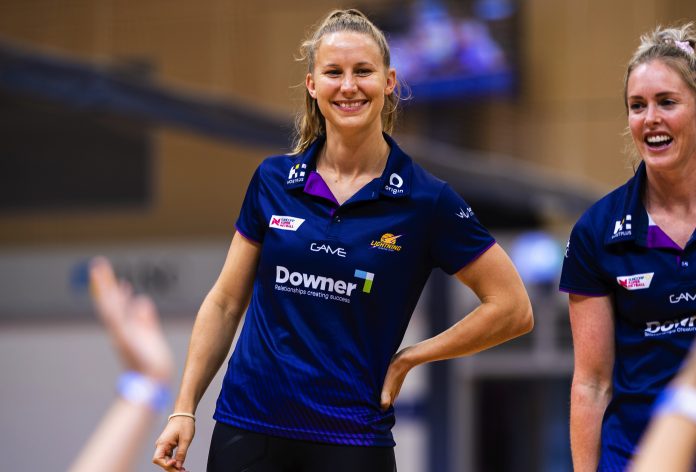 New Sunshine Coast Lightning signing Mahalia Cassidy says she feels right at home with the club already and she wants to stamp her authority on court this season.

The 25-year-old is fully fit after battling two serious knee injuries in the past four years and she’s primed to make an impact with the Bokarina-based side.

The former Firebird said she was nervous at her first Lightning training session but she’s now comfortable at the club and embracing a fresh challenge.

“It felt like my first day of school when I came here …  but it’s been really great during the last few weeks to settle in and it feels like home already,” she said.

“I’m really happy with where I’m at, excited to be around a great group of girls and embarking on a new journey.

“I like a new challenge and that’s why I’m here and I’m excited to take it on.”

Cassidy has shown plenty of potential in games during the past six years at the Firebirds.

“I just really want to get out on the court and stamp my authority and play some really, good consistent netball and play the best I can for the team and get some great results.”

“Year 2021 is all about consistency for me,” Cassidy said.

“I was able to come back from injury and get a pretty good season under my belt (last year), but I didn’t play the consistent netball I was after.

Cassidy is accustomed to playing centre and wing attack and could slot into wing,

“I’m happy to play anywhere … wherever complements the team.”

She could be tasked with filling the big boots of retired star Laura Langman, who was a mainstay of the team at centre.

Cassidy played under Lightning coach Kylee Byrne at Queensland Fusion when she was young, in the national second tier competition.

The north Brisbane raised talent, who has previously studied at University of the Sunshine Coast, forged her path in Brisbane and won a national league title with the Firebirds in 2016.

She said her knees were now as good as they have been and there were “no complaints”.

Cassidy has been in the thick of training, in the gym, on the track, in the pool and on court.

“Pre-season is the hardest, but I’m really enjoying it.”

She’s looking forward to playing against her former team in a Queensland derby, although the structure of the season is not locked in yet.

“We’re being adaptable and seeing how we go but it’s going to be great coming up against the Firebirds.”

“We’re not really sure what’s going to happen and what the season is going to look like, but every team is going to be hard to beat. I’m excited for the challenge and to be in new colours and to experience it with another club.

“I’m just very happy to be up here and settling in has been very easy.”

Byrne lauded the skills of Cassidy, an Australian development squad-member, after she signed with Lightning in November.

“Mahalia is such an exciting player to watch and she is impressive and creative in attack but can also hold her own defensively,” Byrne said.