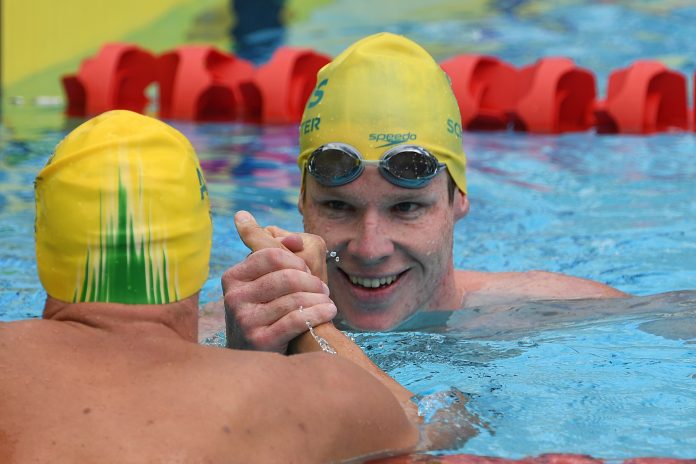 The 22-year-old is expected to be a serious contender at Australian selection trials and the Tokyo Paralympics, despite struggling last year.

Sage said the S14 talent, who broke the 200m freestyle world record in 2019, battled without routine in 2020, when restrictions forced swimmers out of their comfort zone.

“It’s been a tough time for him, to try and get back into routine.”

Sage said Schluter, who has an intellectual disability, suffered especially when there were limits on pool access and the Games were postponed from 2020 to 2021.

“Liam was ready (early last year). He put a really good block of training in and was swimming very fast, doing stuff he’d never done before,” he said.

“He was very committed and really built himself up and then that disappointment was sort of hard to take and he lost his routine. It was like we went back a few years unfortunately.

“That (2020) was really tough. We tried doing some stuff. He came around to my pool and we’d tether him up, we did some beach work, but he hated swimming at the beach, and we kept him moving at the gym.

“But he’s a swimmer, he just needs to swim.”

Re-building for shot at Games

The national squad training camp on the Sunshine Coast in January proved to be a turning point.

“That helped him a lot,” Sage said.

“It’s sort of got him back where he wants to be.

“Once he did that camp, he seemed a lot more motivated and clearer about his shot at the Paralympics.”

Sage said Schluter still has “work to do” but he’s confident his charge can be a contender at national selection trials and at the Games.

“We’ve got a couple of local meets coming up so that will give him motivation and then there’s the Australian championships in April and I think he’ll enjoy that and then it’s just about getting through winter and putting the effort in.

“I’m sure once Olympic trials are getting close, he’ll knuckle down.”

Sage said Schluter had shown some signs of his old form, but they would work on being more consistent.

“He’s doing some good stuff which gives me some confidence but he’s not recovering as well and will be flat the next day. There’s still belief, because we know what he’s capable of. It’s just about breaking down those barriers and being consistent, working on recovery and time management, the little things that make a great athlete.”

Schluter competed in two finals at the 2016 Paralympics and was a silver medallist in the S14 200m freestyle at the 2018 Commonwealth Games.

He put the swim scene on notice when he broke the then-world record in the 200m freestyle at the 2019 national championships (4min16.89sec), before finishing fourth at the world championships, where he also snared bronze in a mixed relay.

He’ll target the 200m freestyle and possibly the 200m individual medley and 100m butterfly during this season.

He is set to contest trials at Lake Kawana in March, after it was postponed from Sydney in January.

The top two at that 10k race will head to an Olympic qualifying event, scheduled for Japan, where the fastest Aussie will be selected for the Tokyo Games.

“He’s swimming well and had a positive start to the year at state championships,” Sage said.

“(Noosa’s) Nick Sloman is still the one to beat but we feel like Bailey’s moving forward.

“If he finishes in top two at Kawana, that will give us another block of training to try and chase down Nick at the qualifying event.”

Armstrong’s club-mate Matt Robinson could cause a boil-over in the 10km qualifying events.

“That was a real highlight, a big deal and he’s got to double that (distance) and be competitive over 10km,” Sage said.

“He’s gaining experience and is a very hard worker.”

Csongor Cellie, 19, is also expected to be a contender this year, after claiming second place in the 200m butterfly at the state championships.

New Zealand’s Julian Layton is set to press claims for an Olympic berth in breaststroke and Czech Republic’s Barbora Zavadova will try to make it to her third Games.

Sage said there’s some nerves within his squad as they approach a key phase of training and competing in their Olympics quest.

“We’re really trying to get fast and get race experience,” he said.

“We’re looking forward to it (the challenge). We’re a bit nervous, because it’s time (to ramp things up).

“As far as we know the Olympics is going ahead (in July). It’s going to look different to other years but we’re preparing and we’re pretty excited.”