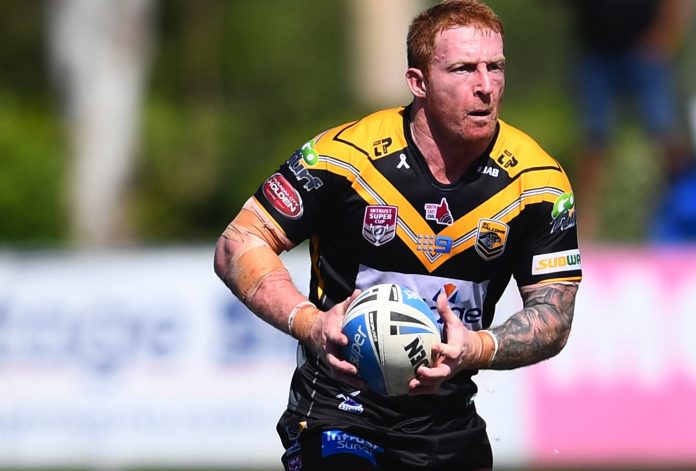 The lure of an elusive premiership win is what drives stalwart Dane Hogan, who has re-signed with the Sunshine Coast Falcons.

The 31-year-old craves success on the state league stage, after coming so close several times in the past.

The hardy back-rower has suffered the agony of losing three grand finals and is desperate to finish his career with a title.

Hogan, who has captained the Falcons for the past four years, believes they can press serious claims this year.

“I want to go that extra step and win the comp,” he said.

“It’s definitely a drive of why I want to continue to play, to tick that off my list before I retire.”

The game that really hurt

Hogan lost grand finals with Easts in 2013 and 2014 before being involved in a heart-breaking defeat with the Falcons in 2017.

The Sunshine Coast led that year’s decider, before being edged by PNG Hunters at the death at Suncorp Stadium.

“That 2017 one was tough to swallow, even leading into the following year. That loss I put down to why we didn’t have the best 2018. It was still hurting at the start of the season.”

The Falcons did put that loss aside by 2019 and were the dominant team for much of that year, losing just one game from 23 in the regular season.

But they were stunned with two straight losses in finals.

Like independent local news? Get more by subscribing to our free daily news feed: Go to SUBSCRIBE at top of this article to register.

“We had a really strong season, winning the minor premiership but just fell a bit short,” Hogan said.

Their 2020 campaign was cut short by COVID-19 but the Falcons have retained many of the players from 2019 and made some key signings for 2021, including former star Jarrod Mullen.

“We’ve got a really good chance this season,” Hogan said.

Hogan, who played 10 games for North Queensland Cowboys from 2010 to 2012, said time away from the game last year has helped re-energise him.

“We only played one game last year, which I probably thought would have been my last year, but I’ve been able to give my body a good break and I ‘m pretty keen to get back into it.”

“I’ve trained really well in the pre-season and we’ve got a really good squad together and we’ve got Sam (Mawhinney) as coach and what he’s trying to implement is pretty exciting. I can see there’s potential there.”

Hogan said the club has “really good” strength and conditioning coaches, who are able to manage his workload and he expects to be “all guns blazing” by the time the Falcons contest trials in six weeks.

He said he’d welcome the captaincy if it was offered to him again.

“I haven’t had a discussion with Sam.

“Todd Murphy and i were co-captains leading into last year and we’ve got a lot of good, young leaders around the club so I’ll wait and see what direction Sam and the club want to go in.”

Hogan manages to juggle a 50-hour plus work week as a refrigeration and air condition mechanic.

The Bribie Island product is also in the process of building a house at Caloundra, with a growing family.

He enjoys spending time with three-year-old son Jaxon and he and wife Kathryn are expecting a baby in March,

“Just after the season kicks off,” he laughed.

When he does get a second to himself, he enjoys hitting the beach for a surf.