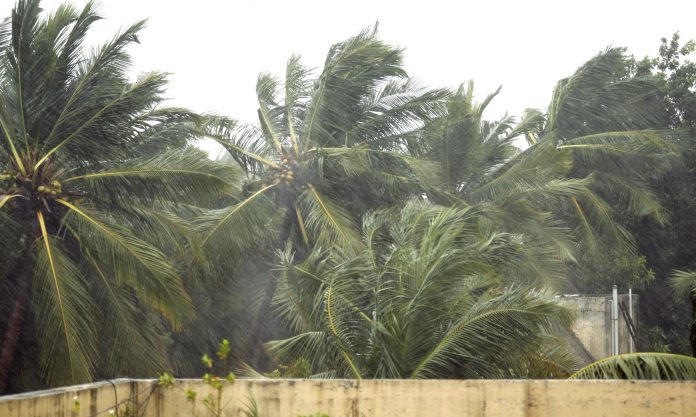 A severe thunderstorm is heading towards parts of the Sunshine Coast on Monday evening.

The weather bureau has issued a warning for areas including Crohamhurst, Maleny, Conondale and Borumba Dam, with possible “life-threatening flooding” caused by intense rainfall.

It comes after the weekend’s fast-moving cell that slammed the Caloundra region, snapping trees and knocking over fences.

BOM meteorologist Alex Majchrowski told sunshinecoastnews.com.au the thunderstorm moving across from out west could impact the Sunshine Coast.

“The main question mark is if the storm will still be severe by the time it gets to the Coast,” he said.

“By the time it gets to the Coast, heavy falls are more likely (than damaging winds or hail).”

There’s also the likelihood of another severe thunderstorm on the Sunshine Coast on Tuesday with large hail, damaging winds and heavy rainfall predicted over a region spanning Bundaberg to the NSW border.

It comes as Tropical Cyclone Kimi hovered off Queensland’s north coast late Monday and was described as “unpredictable” as it changed its movements every three hours.

The cyclone has been classed as category two.

Far north Queensland residents are bunkering down, with Kimi expected to bring destructive winds and heavy rain when – or if – it makes landfall.

North Queensland residents are battening down the hatches, with a tropical cyclone strengthening to a category two storm and shifting direction a second time.

The Bureau of Meteorology says Cyclone Kimi was barrelling south about 195km north of Townsville at 1pm AEST on Monday.

Kimi is set to slow and stall between Hinchinbrook Island and Townsville and potentially weaken before crossing the coast on Tuesday.

However, forecasters warn it could still make landfall as a category two storm, packing winds up to 150km/h, on Monday night or on Tuesday.

“Considerable uncertainty remains with the future movement of the system, and a category two coastal crossing between Hinchinbrook Island and Townsville tonight or on Tuesday remains possible,” the bureau says in an alert.

Residents from Innisfail to Bowen, including Townsville, are being told to prepare for gales up to 120km/h, heavy rains and abnormally high tides.

Premier Annastacia Palaszczuk urged people to listen carefully to media reports and updates on where the cyclone moves.

“Everybody in the north … should be listening to the media reports very, very closely because the bureau will be giving those reports every three hours, and we’ll be giving a further update from the state government this afternoon,” she told reporters.

People between Innisfail and Ayr are being urged to get ready and secure their boats and homes in particular.

“I know we’re Queenslanders, I know we go through cyclones every single year but please do not be complacent,” Police Minister Mark Ryan said.

The bureau also warns that heavy rainfall could bring flash flooding and major river flooding to coastal and hinterland areas between Port Douglas and Ayr on Monday and Tuesday.

“So if you’re in those areas you need to prepare … if it’s flooded forget it, have a plan about where you’ll be travelling, bear in mind where those river catchments are, be aware that during this event you could have flash flooding,” he said.

Parts of the Wooroonooran, Girramay and Paluma Range national parks, and the Abergowrie State Forest, have been closed.

With the cyclone set to dump rain on large parts of Queensland’s interior, flood warnings have also been issued for a number of inland rivers.

The Norman and Gilbert rivers in the Gulf Country and most of the Queensland tributaries of Lake Eyre could break their banks.