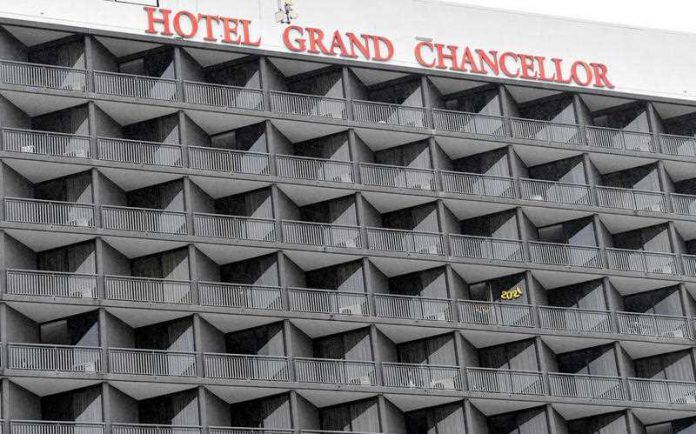 Premier Annastacia Palaszczuk has floated mining camps as an alternative to hotel quarantine after shutting down Brisbane’s Hotel Grand Chancellor because of a worrying cluster.

Ms Palaszczuk said she would bring the idea to National Cabinet on Friday week.

The premier said many mining camps were “four-star” and of a “very good, high standard” and had balconies where “guests” could go outside for fresh air.

It comes after hundreds of people in quarantine were transferred from the Grand Chancellor after six people were found to have contracted the same virus.

Also 226 staff have been contacted and would be tested and undergo two weeks of quarantine.

It comes as four people tested positive – all of them travellers in hotel quarantine but not connected to the Grand Chancellor – and 13,000 tests were undertaken.

Investigations are ongoing into how the hotel cleaner and guests in the Grand Chancellor cluster contracted the same virus.

NSW has issued an alert for anyone who has been at the Hotel Grand Chancellor in Brisbane, fearing a highly contagious strain of coronavirus may have spread across the border.

The quarantine hotel is linked to six cases of the UK variant of COVID-19 and has been closed by the Queensland government for deep cleaning.

NSW Health urged anyone who had been at the hotel as a returned traveller or worker to immediately get tested and isolate for 14 days, regardless of the result.

“NSW Health is working with Queensland Health to identify these people so our contact tracers can provide public health advice and updated information as it becomes available,” it said.

It comes as Chief Health Officer Dr Kerry Chant said it was unlikely coronavirus restrictions across Greater Sydney would be eased in the coming days.

She said authorities needed at least another three weeks to ensure the Berala and northern beaches clusters are squashed.

“It would take at least three, maybe four weeks and so I need the community to be on track with us,” Dr Chant said.

“As an epidemiologist, we like to see around two incubation periods before we assess that we are free of the disease.”

NSW recorded one new locally-acquired COVID-19 case in the 24 hours to 8pm on Tuesday, in a child connected to the 28-person Berala cluster.

Premier Gladys Berejiklian also confirmed a COVID-positive man, who presented to Mount Druitt Hospital last weekend with respiratory symptoms, and his partner are linked to the Berala cluster.

Public health alerts remain in place for dozens of hotspots around Greater Sydney, including a shopping centre in Warriewood, a post office in Hurlstone Park and a workers’ club in Blacktown.

Meanwhile, South Australia has lifted COVID-19 restrictions for travellers from regional NSW, but will continue to block visitors from Sydney and surrounds.

The Brisbane hotel that is now the centre of a COVID cluster has been evacuated and an urgent operation launched to test and quarantine anyone who had been there since December 30.

It comes after six people were confirmed with the UK strain and all were linked via genome sequencing, prompting an “urgent incident response”.

The cluster is understood to date back to the suspected first case on December 30th of a man who arrived from the UK.

It is not known how the virus was transmitted from the young man to some of the others at the hotel which include the hotel cleaner and a man and his daughter from Lebanon.

Most of the attention is being focussed on the seventh floor.

The genomic link between the six cases has sparked a massive operation to move everyone out of the hotel and contact all who had been in quarantine or worked there since December 30th.

Starting Wednesday, all 129 guests in the hotel will be retested and moved to another quarantine facility and undergo another two weeks of quarantining.

All staff who have worked at the hotel since December 30 will be asked to quarantine and again be tested.

Major contract tracing has been launched to track down 250 people who have left the hotel since December 30 and remain in Queensland.

They will have to undergo testing and quarantine for another two weeks.

Chief Health Officer Dr Jeannette Young said an extra 14 days quarantine was vital until authorities could determine how the virus had spread.

“If we find out what’s happened on that floor seven and that’s a reason for how it’s moved, transmitted, then that might change, but at this point in time it’s 14 days because I don’t know how that transmission has occurred.”

Dr Young said there was no evidence at this stage that the hotel or any of its staff had done anything wrong.

“And I want to compliment hotel management for their level of cooperation,” she said.

“It’s important we understand the link. It’s a mystery we need to solve.”

The investigation into how the virus breached quarantine protocols is being led by Queensland Police and is continuing.

The six cases include:

Dr Young said swift action meant there would be no current need to change restrictions in Greater Brisbane or around Queensland.

“There are two parts to this that we need to address – the incident response and the epidemiological mystery behind the source.

“Work on both is vital but the immediate incident response is critical,” Dr Young said.

Dr Young said she apologised for the disruption the incident response would cause.

“Throughout this pandemic we have acted with an abundance of caution, which is what we are doing today,” Dr Young said.

“I want to say to the guests currently in the hotel and the staff that their safety and wellbeing is our key priority.

“We don’t have evidence of any specific issue – we are doing this out of caution.”

A number of actions have taken place at the hotel since the cleaner tested positive on January 6, including:

Dr Young said once identified, Queensland would be providing a list of all guests with interstate or overseas home addresses, who had left the hotel, to relevant authorities.