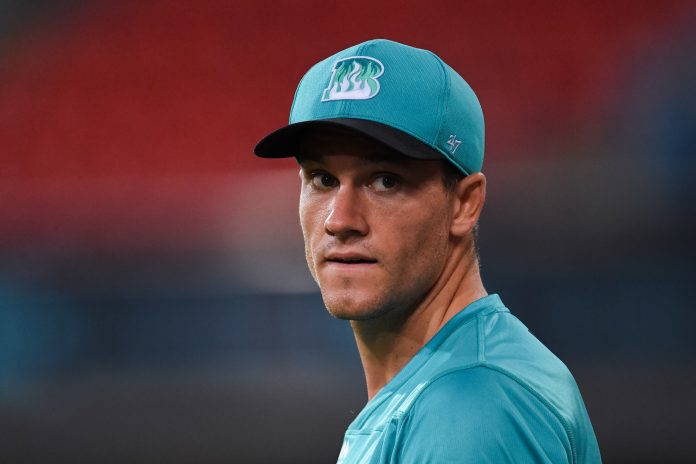 The Sunshine Coast’s James Bazley is relishing his role at the Brisbane Heat and says he’s learning from other all-rounders in the Big Bash League.

The 25-year-old showed his wares with the ball against Sydney Sixers at the Gold Coast on Sunday night, after shining with the bat in previous games.

He snared 2/17 from three overs, with his medium pacers, in a tense loss to the Sixers.

“It was nice to bowl some overs,” he said.

“Being an allrounder, you’ve got options to contribute with bat and ball.

“If you get out for a first ball duck, you’ve got to shake it off and go out and do your job with the ball and in the field. That’s the joy of being an allrounder, you get a crack in the next innings.”

Love sport? So do we. Help us to cover more by subscribing to our free daily news feed: Go to SUBSCRIBE at top of this article to register.

He’s soaking up the experience in the BBL and is closely watching other all-rounders, like Sixers star Dan Christian, who smashed 61no from 38 balls.

“He is a someone to look at and learn from and is a great blueprint of a quality allrounder,” Bazley said.

“Dan is a serious player … he’s a confident player who looks quite clear in his planning and what he wants to do at the crease.

“He looks like he’s always committed to everything he’s doing and that’s something I’ve learned from him.”

In form for Heat after journey to get there

Bazley, a former Sunshine Coast Scorcher, is making the most of his time at the Heat this season.

Heat’s James Bazley of the Brisbane Heat attempts a run-out during their BBL match against the Sydney Sixers  at Metricon Stadium on Sunday. Picture: AAP Image/Nathan Hopkins.

An ex-Australian under-19 representative, he made his first-class debut for the Cricket Australia XI against the West Indies at Brisbane in 2015, scoring a half century and claiming the wickets of the openers.

He’s had prior contracts with Brisbane Heat, Queensland and the Hobart Hurricanes in the past but he was hampered by injuries and didn’t manage to get any game time.