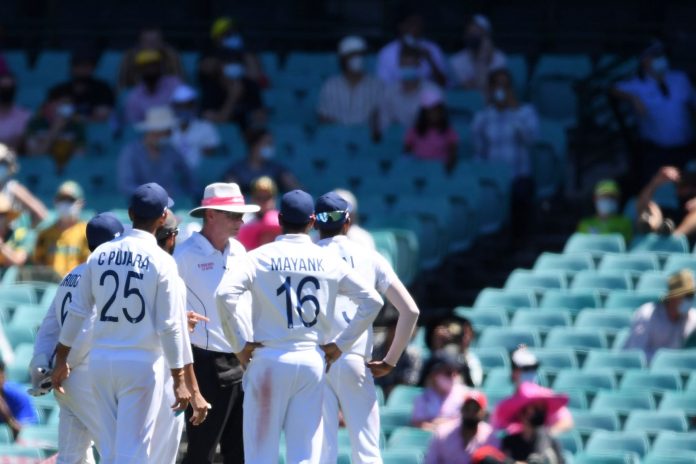 India superstar Virat Kohli wants “strict” action against any spectator found to have made racial slurs as the fallout from the SCG Test drama continues.

India made an official complaint to the ICC on Saturday night over alleged comments made to Mohammed Siraj and Jasprit Bumrah on day three.

The situation then escalated further on Sunday when Siraj claimed more abusive comments had been made to him just before tea, stopping play for eight minutes.

The halt in play brought the issue to a head, with NSW Police and Cricket Australia launching separate investigations into the second incident.

“Having gone through many incidents of really pathetic things said on the boundary Iines, this is the absolute peak of rowdy behaviour.

“It’s sad to see this happen on the field.

“The incident needs to be looked at with absolute urgency and seriousness and strict action against the offenders should set things straight for once.”

While back in India awaiting the birth of his child, captain Kohli was one of several India players to speak on the incident.

Veteran Ravichandran Ashwin wants the matter to be dealt with using an “iron fist” and said the abuse of India players had been an issue his whole career in Sydney.

“If I take myself back to my first tour in 2011-12, I had no clue about racial abuse and how you can be made to feel small in front of so many people,” Ashwin said.

“And the people actually laugh at you when you get abused, I had no idea what this was about.

“When I stood at the boundary line, you wanted to stand another 10 yards in to keep yourself away from these things.”

The SCG Trust are also investigating the matters, promising life bans for anyone found to have made racial remarks.

Australia coach Justin Langer said he was upset and disappointed by the situation, slamming anyone who felt they could abuse players in any sport.

He also stressed the value of his own education in the past year, with CA launching the ‘Reflect Forward’ campaign to combat racism.

Pat Cummins and Tim Paine have spoken publicly on their push for better education on Indigenous matters, via reading or talking about the topic.

Australia’s decision not to take a knee on last year was criticised at the time, however they have started the new tradition of a barefoot circle between each series.

“My personal journey has been huge,” Langer said on Sunday.

“I’ve obviously watched the Adam Goodes documentaries a couple of times over the past few months.

“It’s something the team has been looking (at). We’re exploring and learning and being educated.

“The more you get educated and the more you understand, the more sickening it is when you hear of racial discrimination as has been alleged today.”