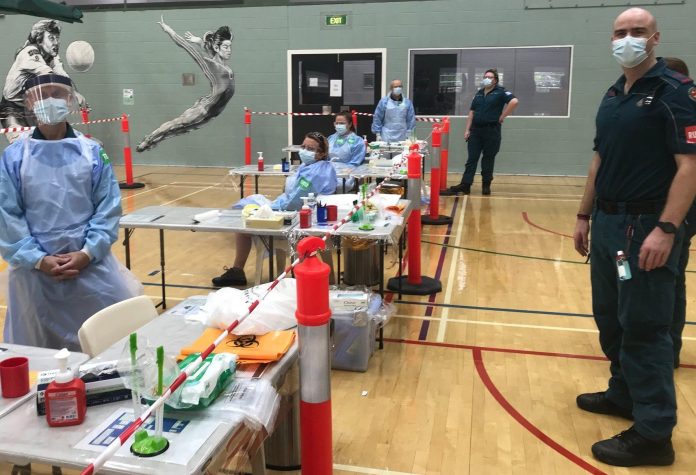 Paramedics have opened an emergency COVID-testing clinic in less than 24 hours in Noosa in response to a surge in demand.

It’s the only temporary clinic opened in Queensland in response to a health directive for people who had been in Victoria to get tested.

It comes as clinics and medical centres on the Coast were inundated on Monday, with people forced to wait several hours while doctors worked overtime.

Paramedics have been trained to assist and support Queensland Health with COVID-19 testing and rapidly deploy to areas of need.

Within the first hour of opening at the Noosa Leisure Centre on Tuesday, paramedics tested 40 people.

Prior to the temporary clinic, the Noosa region had only two testing facilities at the Sullivan Nicolaides pathology centres in Noosaville and Tewantin.

It would operate 7am to 5pm on Wednesday and after that the opening hours would be determined progressively.

She said the team had worked quickly through the night to ensure everything was ready to begin swabbing.

“We were contacted last night to set up by midday today,” she said.

“We deployed a team and we had people work through the night so we had a team ready by 6am.”

The staff of about 20 comprises mostly paramedics from the Sunshine Coast, Gold Coast, West Moreton, Metro North and Metro South.

There have been more than 20,000 tests in the past two days after a push for people who had been in Victoria since December 21 to get tested.

Public health directions have been issued banning people who have been in Victoria on or after December 21 from entering residential aged care facilities, disability accommodation and hospitals unless 14 days have passed.

Hospital visits are permitted if a negative COVID-19 test is obtained in Queensland.

Regional NSW is on alert after a young man travelled thousands of kilometres through the state then tested positive for COVID-19.

The 18-year-old Berala man visited Orange, Nyngan and Broken Hill in the state’s central and western regions after visiting the bottle shop at the centre of a recent cluster on Christmas Eve.

His case was identified on Tuesday morning. Swabs from his camping mates are being analysed on Tuesday.

Visitors to Orange’s Birdie Noshery and Nyngan’s Riverside Tourist Park may need to be tested, with more regional venues likely to be subject to alerts.

The case comes on top of four locally acquired infections recorded in the 24 hours to 8pm Monday.

NSW Health Minister Brad Hazzard said people from Berala and surrounding suburbs faced a $1000 fine if they attended the upcoming test at the SCG.

Health authorities have struggled to directly contact the thousands of people affected by broad alerts for the BWS and Woolworths at Berala. They have been forced to use credit card and rewards card data as QR codes are not mandatory in shops.

Health investigators are poring over CCTV from the shopping centre to establish whether transmission occurred in the Woolworths.

The northern part of the northern beaches peninsula, where the cluster of 148 infected people has not grown for the past two days, will remain under stay-at-home orders until at least Saturday.