Why Ashley Robinson is feeling toey about Christmas karma 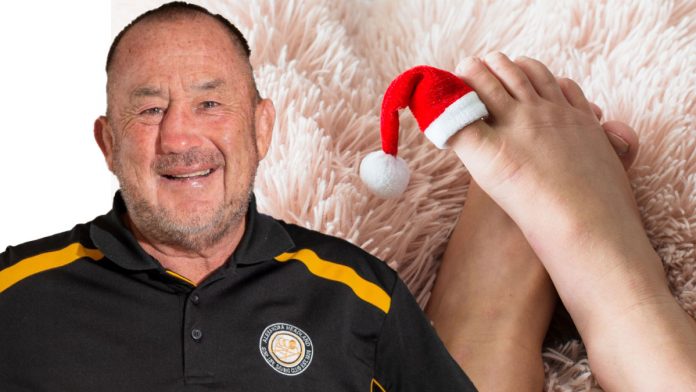 Christmas, me and toe injuries have a long and painful history.

I am currently suffering from an infected pinky toe which is more bright red than pink and if I could lop it off to ease the pain I would, particularly after I kicked the little wheel on the bed with it the other morning.

Back in the day, I used to get ingrown toenails on my big toe and for some reason they would occur over Christmas when in there wasn’t a doctor available anywhere, well before 24-hour medical centres.

So I would have to bear the pain for a few days with the only relief a bottle of rum.

Why am I telling you this, you may well ask.

Well, my toe history at Christmas runs in the family and goes back to 1959 when I was a little fat kid about as round as I was high and I had a scooter that I rode that much that the rubber had come off the wheels, but I still raced around wherever I could.

On this particular Christmas in Eudlo, it was about 100 degrees and dear old Dad was under the house plucking a duck for the impending Christmas sweaty baked lunch and was having trouble getting the pin feathers out, so there was lots of mumbling and a little swearing.

I was riding my scooter up and down the driveway and under the house and was told to ride it away from Dad, but of course did the opposite and tried to go as close as possible to him as I whizzed by but lost control of the scooter and actually ran over his big toe.

Did I mention he had an ingrown toenail at the time, which my metal wheel with my fat little body on it nearly decapitated?

I could run pretty fast, as could Dad. Lucky for me, he had to pause for a moment because of the blinding pain before he regathered himself for the chase.

I made it behind Mum’s skirt in the kitchen before he got me, but I reckon karma has paid me back in spades since.