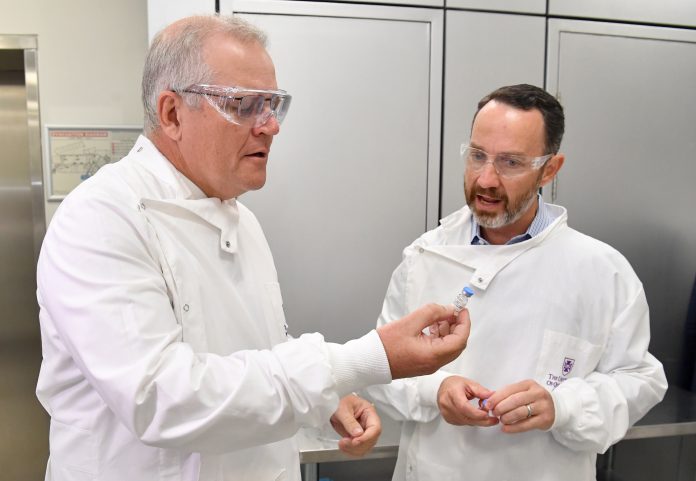 Scott Morrison has praised the “amazing” work of scientists after the University of Qld and CSL abandoned trials of a coronavirus vaccine.

The federal government has canned a deal to buy 50million doses of the potential coronavirus vaccine that was being developed in Australia.

The trials were abandoned after a unanimous decision from scientists and regulators concerned about participants returning a “false positive” test for HIV.

Although there was no HIV infection present in the participants, the false positive would erode confidence in the vaccine leading to a “unanimous” decision to end the trials.

Mr Morrison said Australia would now increase its orders of other vaccines being developed overseas.

The government will increase its purchase of the Astra-Zeneca vaccine from 33.8 million doses to 53.8million doses.

Mr Morrison praised Professor Paul Young and the team at UQ, and said the government would continue to fund their “molecular clamp” research.

A joint UQ-CSL media release said the vaccine had proven to be safe and effective during Phase 1 trials but the “false positive” was a lingering issue.

“There were no serious adverse events or safety concerns reported in the 216 trial participants,” the statement said.

“However, following consultation with the Australian Government, CSL will not progress the vaccine candidate to Phase 2/3 clinical trials.”

The statement said there was no possibility the vaccine caused infection, and routine follow up tests confirmed there was no HIV virus present.

UQ vaccine co-leader Professor Paul Young said that although it was possible to re-engineer the vaccine, the team did not have the luxury of time needed.

“Doing so would set back development by another 12 or so months, and while this is a tough decision to take, the urgent need for a vaccine has to be everyone’s priority.”

Queensland Premier Annastacia Palaszczuk, who joined other state and territory leaders in Canberra on Friday for a meeting of the national cabinet, said the UQ/CSL outcome was disappointing.

“Of course, there is going to be some winners and losers,” she told Nine.

“It is very, very disappointing about the UQ vaccine but there are a lot of other candidates out there.”

The government had previously said it wants to start rolling out a vaccine to the Australian community early in the new year.

UQ Vice-Chancellor Professor Deborah Terry said while the outcome was disappointing, she was immensely proud of the UQ team who had shouldered a heavy burden of responsibility while the world watched on.

“I also want to thank our many partners, our donors – including the Federal and Queensland Government – and of course the 216 Queenslanders who so willingly volunteered for the Phase 1 trials.”