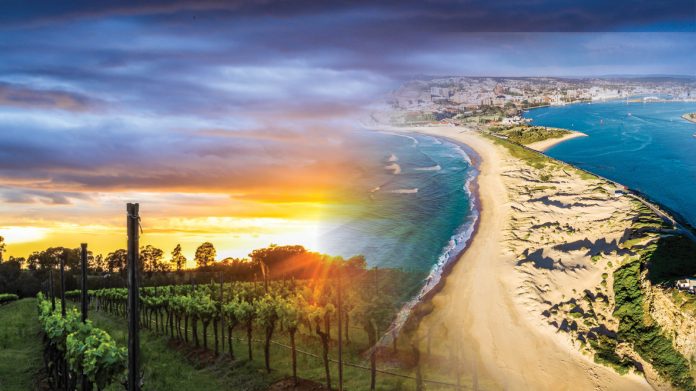 Sunshine Coast residents could soon enjoy a summer holiday in the wine-growing Hunter Valley region with the launch of a new direct flight in January.

Fly Pelican will begin flying three times a week to Newcastle from January 4 until March, adding to the growing list of domestic destinations available from Sunshine Coast Airport which recently added Cairns and Canberra.

Newcastle is the gateway to the food and wine region of the Hunter Valley and the coast of Port Stephens.

Travellers will take to the skies in a 19-seat jetstream turbo prop, so tickets will be limited.

As sunshinecoastnews.com.au revealed at the weekend, Newcastle was one of five new places on Sunshine Coast Airport’s wishlist of domestic destinations as it lobbies airlines to bring in extra routes.

The others are Tasmania, Mackay, Rockhampton and Townsville.

Fly Pelican is an Australian-owned airline which flies mostly within New South Wales. The Sunshine Coast would be its first Queensland destination.

The route was secured with $15 million from the Queensland Government’s Aviation Recovery Fund which Tourism Minister Stirling Hinchliffe said was helping the industry after COVID.

“It’s shaping up as a bumper summer on the Sunshine Coast with Fly Pelican delivering more choice for Newcastle visitors.”

“It is really exciting to launch this new service, linking the Sunshine Coast to Newcastle for the first time ever,” Mr Hawley said.

“We look forward to welcoming Sunshine Coast residents on board our 19-seat Jetstream turbo prop, which is all part of the Fly Pelican experience.

“We encourage locals at both ends to explore a beautiful part of Australia, support the service and help make it a long-term proposition.”

“The confidence that Fly Pelican have shown in our region is very encouraging. This seasonal service opens the Sunshine Coast up to a new market with direct connectivity for Newcastle visitors,” Mr Fairbairn said.

“Newcastle and Noosa have a synergy with beautiful beaches, a great dining scene and lots to explore on our doorstep, so I have no doubt the route will be a success and we look forward to welcoming new guests and reconnecting with repeat visitors”, Ms Anderson said.

The service will operate Mondays, Wednesdays and Fridays.

Ticket prices start from $199 one-way between Sunshine Coast and Newcastle are on sale at flypelican.com.au or through travel agents.