Borrowing billions the only choice: Treasurer

Borrowing billions the only choice: Treasurer 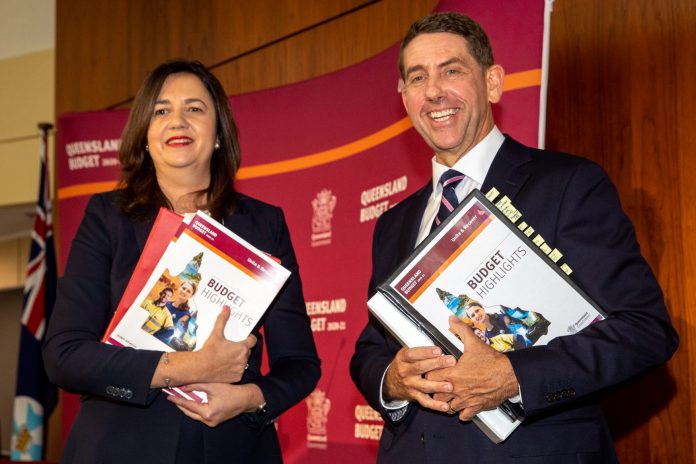 Queensland will run deficits for the next four years and plunge into almost $130 billion worth of debt with the government saying “borrowing is the only choice” to spark an economic revival.

That’s the grim outlook of the sunshine state’s 2020/21 budget, unveiled on Tuesday.

There will be another $17 billion borrowed before July next year to stimulate the economy amid falling revenue.

The bottom line has suffered a $3.5 billion hit to revenue with GST receipts, tax and royalties all down due to the COVID-19 pandemic and lower coal and oil prices.

That will take the total debt to $110.1 billion this year and $129.7 billion over the forward estimates.

“Borrowing is not my first choice, but right now, and for several years into the future, borrowing is the only choice,’’ Mr Dick said.

“As I said during the election campaign, budget deficits must be funded from borrowings. Accordingly, borrowings will increase.

“No Queenslander will be surprised by that.’’

Mr Dick’s calculations rely on a Government forecast of a coronavirus vaccine by late 2021 and the budget indicates the economy is showing green shoots.

Unemployment will no longer peak at nine per cent by Christmas, as previously predicted, with the budget showing it reached its highest point at 7.9 per cent in the September quarter.

Mr Dick said Queensland initially lost 205,400 jobs due to coronavirus, but the state has now recovered after creating 205,900 jobs since the pandemic began.

“The good news is that here in Queensland we have recovered every job that was lost during COVID,’’ he said.

“No other state and territory has achieved that feat.’’

He was optimistic that reopening the state’s borders will further boost the economy, but he warned that would also create new problems.

The treasurer said the primary issue was the net migration from other states putting stress on Queensland’s labour market.

Federal treasury forecasts indicate 86,000 people will move to Queensland from other states over the next four years, Mr Dick noted.

That will account for eight per cent of Australia’s net internal migration.

The government is still aiming to cut $750 million from existing spending in 2020/21 and $3 billion over the forward estimates.

Mr Dick said government operations would be more efficient with a number of spending targets for departments and agencies.

Queensland remains non-committal about a net zero emissions target by 2050.

The 2020/21 budget highlighted a previous commitment to reach a 50 per cent renewable energy target by 2030, but Premier Annastacia Palaszczuk would not look further ahead.

“I’m actually focused on our 50 per cent renewable energy target,’’ she said, stating Qld had already reached 20 per cent.

NSW has laid out plans for zero net emissions by 2050, putting pressure on its northern neighbour.