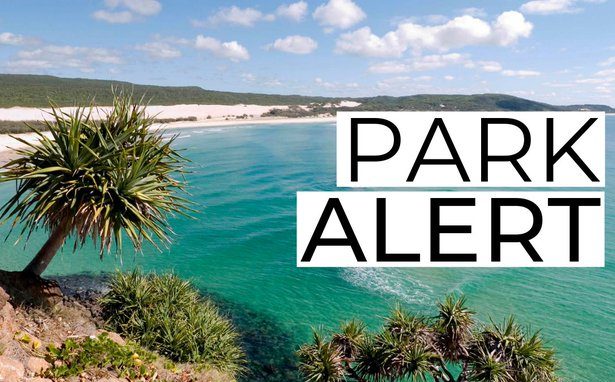 Update: More than 40 per cent of Fraser Island has been burnt as firefighters continue to battle a blaze on the World Heritage-listed island.

As of 8.45am Monday, a bushfire is burning with two fronts: One front is about 4km north east of Kingfisher Bay Resort, and the second is on the eastern side of the island, about 2km south of Cathedrals on Fraser.

QFES and QPWS in conjunction with the Butchulla Aboriginal Corporation are working to limit the spread of the fire and minimise environmental and cultural impacts.

Fraser Island has been closed to tourists as a six-week-old bushfire threatens to flare up amid impending heat wave conditions.

The flames are about 5km from Kingfisher Bay Resort and firefighting reinforcements have been called in with the weather expected to deteriorate over the weekend.

So far the fire has burned through 74,000 hectares of bushland on the pristine World Heritage-listed island.

Access for visitors closed from 5pm on Friday, but people already on the island were allowed stay, Queensland Fire and Emergency Services said.

“This is due to the erratic and difficult fire weather conditions we are experiencing there and the movement of the fire in the last 24 hours,” Commissioner Greg Leach told reporters.

“Our operations in the last couple of days had limited success in holding the front of the fire.

“If people have plans to head to the island and are on their way there now, they should take the opportunity to turn around.”

Extra firefighting crews were being sent to the resort on the western side of the island but it had not been evacuated, Mr Leach said.

Hotter, drier winds with the potential to carry the fire in a southerly direction are forecast over the weekend.

Residents and people supplying essential services are permitted to stay and travel to and from the island.

“This is not an evacuation of the island … but we are asking everyone to pay attention to the current warnings as the situation could deteriorate,” Mr Leach said.

Due to the ongoing threat posed by this bushfire on Fraser Island authorities have stopped tourists from visiting 🔥 Please take care if you do suffer any breathing difficulties and stay indoors as It’s very smokey #fraserisland #bushfire #news #qldnews #Queensland #Australia pic.twitter.com/eh7xeYHhCo

People have also been urged to stay off the island’s inland tracks and roads.
The giant blaze is thought to have been started by an illegal campfire on October 14.

Numerous campsites in the north of the island have previously been evacuated.
Fraser Island is about 250km north of Brisbane and is the world’s largest sand island at 123 km long.