The simple recipe that helped Kim conquer the world

The simple recipe that helped Kim conquer the world

The cake that helped Kim conquer the world 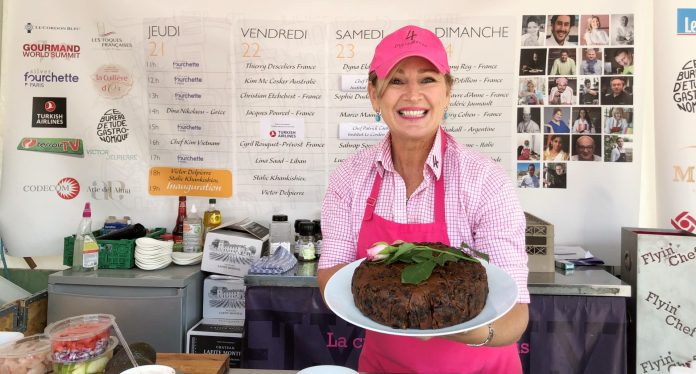 Kim McCosker has cooked thousands of dishes and sold millions of cook books, but one simple cake recipe helped her take over the world.

Thirteen years after the launch of 4 Ingredients, the Caloundra mum of three has published 37 books with more upcoming projects in 2021.

But after testing, tasting and sharing tens of thousands of recipes, there is one that is responsible for her biggest book sales.

Originally published in 2007, Kim said the old-fashioned fruit cake with no butter, sugar or eggs has driven the ongoing popularity of her debut book.

To date, the self-published 4 Ingredients – which had no photos or fancy touches – has itself sold more than three million copies worldwide.

“About one-third of those sales are related to one recipe – a fruit cake with just three ingredients. It would have to be the most popular recipe,” she told sunshinecoastnews.com.au

“The book still sells out. If you walk into KMart 13 years later this is still on its shelves. It’s just incredible.”

Kim launched 4 Ingredients at a time when Nigella Lawson and Jamie Oliver dominated the food scene with complicated and expensive concoctions.

A busy working mum, Kim wanted easy meals and began compiling favourites from family and friends, which sparked the idea for basic recipes with less than four components.

Her latest book, launched in August, continues the 4 Ingredients theme by reinventing the Aussie pie with easy pantry fillings that can be popped into a pie maker.

Veggie and Vegan made its debut during the pandemic in June this year.

Coming up in January next year she will release recipes that can be cooked in an air fryer, the latest must-have appliance that cuts calories by 70 to 80 per cent.

The book was requested by KMart amid a boom in sales of the kitchen appliance which is like a mini oven that can cook everything from chocolate cake to hot chips.

She’ll also be working on an updated version of 4 Ingredients Diabetes on request from Diabetes Australia Victoria.

All this comes on top of her most recent success, 4 Ingredients Keto which has been flying off shelves, selling 120,000 copies in Australia since it was launched in June last year.

The book has been named “Best in the World – Diet Category” at the Gourmand World Cookbook Awards – the Oscars of recipe books.

Kim’s keeping-it-real approach has sustained the popularity of her titles amid a boom in reality TV shows centred on fancy food.

“We love food, we are aspirational with food we appreciate the skill set that goes into making food than ever before,” she said.

“But the reality is that we toddle into our kitchen, open our freezer or fridges and pantry and go ‘Right, I’ve got puff pastry, bacons, eggs and onion. What can I do?’

“Enter 4 Ingredients. We still want easy at the end of a busy day.”

Kim said her easy recipes were a comfort to many who either turned back to home cooking or needed a baking idea that didn’t use flour.

“The uptake and interest in cooking in COVID was a lot stronger than we anticipated,” she said.

“So we hunkered back to grandma’s recipes; golden syrup dumplings, her custard slice, meat loaf, her simple chicken curry.

“It was just fond food memories and that all gave us food for thought for potentially another title in 2021- 22.”

FREE EVENT: Kim McCosker is hosting a Christmas Cooking event at the Ginger Factory at Yandina on Wednesday, December 2, using a range of Buderim Ginger products. All are welcome. The venue is large, covered and outdoors. Information: www.gingerfactory.com.au

With these 3 simple ingredients you will make one of the most popular cakes in 4 Ingredients’ history; Fruit cake! This one in particular as it has no added sugar, cream, butter or eggs.

In a large mixing bowl, place the fruit. Pour over the tea, cover with cling wrap and soak overnight. Preheat oven to 125°C. Line a 22cm cake tin with baking paper. Add the flour, and stir to combine; this is a thick mixture so you may need a little elbow grease.  Using a spatula, scrape the mixture into the prepared tin. Bake in the lower third of your oven for 2½ hours or until cooked through. Remove and leave to cool completely. Wrap in alfoil or place in an air-tight container where this cake will keep nicely for weeks.

Whip up this deliciously easy meal for the family. The pesto and spinach pair perfectly with salmon.

Preheat oven 180°C.  Place the pumpkin on a baking tray and season with sea salt and cracked pepper. Cook for 15 minutes or until tender. After 5 minutes, place the salmon fillets on another baking tray, season with cracked pepper and bake for 10 minutes. Remove both, place the cooked pumpkin into a large bowl, add the spinach and pesto and toss to combine. To serve, place the delectable salad on a place and nestle a salmon fillet amongst it.