How mum lost 75kg and won gold in three sports

How mum lost 75kg and won gold in three sports 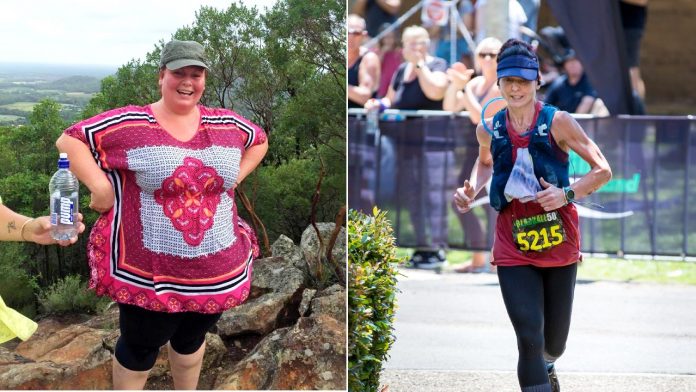 A Sunshine Coast mum who was 140kg has revealed how she took to the mountains to shed half her weight and reach the summit of not one, but three sports.

Beerwah’s Reesha Lewis swapped pizza and parties for veggies and mountain climbing to lose 75kg and become an athletic sensation.

The mum-of-two is now so fit she has won titles and outclassed elite athletes in three sports – boxing, mountain running and ultramarathon running.

Her rise to the top has been phenomenal. After COVID forced the closure of gyms, the keen boxer took up running during lockdown and in less than six months won her first 50km endurance race.

Her weekly exercise schedule is now jam-packed, with at least three hours’ training a day when her family is asleep or at school, including:

Reesha’s journey from 140kg to her weight today of about 66kg began on the Australia Day long weekend about five years ago.

Her friends suggested a hike up Mt Ngungun in the Glass House Mountains but Reesha had to stop every five to ten minutes to catch a breath.

“I got to the top and I loved it but I was exhausted,” Reesha told sunshinecoastnews.com.au.

“I got home and I was crying, it just finally hit me that I’m so unhealthy and so unfit, and what I had done to myself.”

For most of her young life Reesha had been active in a range of sports like cross country running and horse-riding.

But when she finished school and started working at the local servo, frying fatty foods for customers and working odd hours, the weight began to pile on.

“I cooked a lot but it was it was stuff like nachos and wedges with sour cream and the works and if we were out we’d stop at Maccas and KFC or grab pizza,” she said.

Life stresses fuelled more eating, including her mother’s battle with leukemia and her nan’s passing.

By the time it dawned that something needed to be done, Reesha was 30 years old and a mother of two.

“I didn’t realise, even then. I would look at a photo and I didn’t see myself as 60kg heavier than my friends,” she said.

“Even now when I look at those photos I see a big girl but I don’t see 140kg; that doesn’t register.”

When she vowed to change, Reesha’s mother Sue was right beside her as they woke before dawn three times a week to climb Mt Ngungun.

As the kilos melted and her fitness improved, she climbed faster and went more frequently, doing several repeats of the towering summits of Beerwah, Tibrogargan and Ngungun.

“My mum said ‘I’ll help you’ so we would get up at 3.30 Monday, Wednesday and Friday no matter if it was drizzly rain, and all through winter and then we started doing it four to five times and then seven days a week,” she said.

“Then on Tuesday and Friday we would do it in the mornings and afternoons and at one stage we were doing it nine times a week.”

The weight started falling off and Reesha dropped 20kg in the space of five months but in the meantime she suffered the taunts of others while she was outside exercising.

“I would be out riding and someone would yell out ‘Keep riding fatso’ or people on the mountain would say ‘I’ll race you’ but it just added fuel to my fire,” she said.

“I thought to myself: ‘I will race you one day and now I can.”

As Reesha’s body adapted and the weight loss plateaued, she would up the ante on exercise – adding rowing, cycling, boxing, personal training and eventually running – and make more changes to her diet.

She experimented with the high-protein keto diet but now follows a mostly vegan eating pattern which she says gives her more energy and aids in the body’s recovery.

In 2019, after only boxing for a short while Reesha won the Qld title, becoming the state champion, and took silver in the Australian Championships after only five fights.

Also that year she was crowned female winner of the annual King of the Mountain race at Pomona, completing the 4.2km up-and-down course in 29 minutes 47 seconds, despite a morning of vomiting and diarrhea.

Then in October this year Reesha surprised herself and stunned seasoned ultrarunners when she came from nowhere to win the 50km event at this year’s iconic Blackall 100 in the Sunshine Coast hinterland.

The gruelling endurance race, which goes up and down the Blackall Range, tests even the fittest athletes and claims many scalps.

Reesha crossed the finish line in 4 hours 56 minutes with a huge grin on her face to claim first female after only taking up ultrarunning during the COVID lockdown this year.

“Honestly I think I was in shock,” she said.

“When I ran into the finish it was like, ‘Oh my God, this has happened’.”

She followed it up in November with a first place in The Guzzler – another 50km event in Brisbane – where she outclassed all the men to claim first overall.

Now that her fitness has been unleashed, Reesha is virtually unstoppable, refusing to take time off from training.

She has set a new goal to run the length of the Kokoda Track (96km) in Papua New Guinea and to climb 13 continuous laps of Mt Beerwah to achieve a half marathon distance.

Reesha says she is happy with her current weight and has learnt to accept her body which has only a few signs of extreme weight loss.

“I am 34 and I’ve had two kids and some things are going to jiggle more than I like and I can’t help that but I have leant to accept my body,” she said.

AMAZING DIET SECRETS: Don’t miss sunshinecoastnews.com.au on Monday for Reesha’s tips on how to lose weight and eat like a champion

DO YOU HAVE AN INSPIRING STORY TO SHARE? Email us: news@sunshinecoastnews.com.au