Why enduring spectacle is even more special this year

Why enduring spectacle is even more special this year

'They keep coming back': thousands return for a special running of a Coast sporting favourite 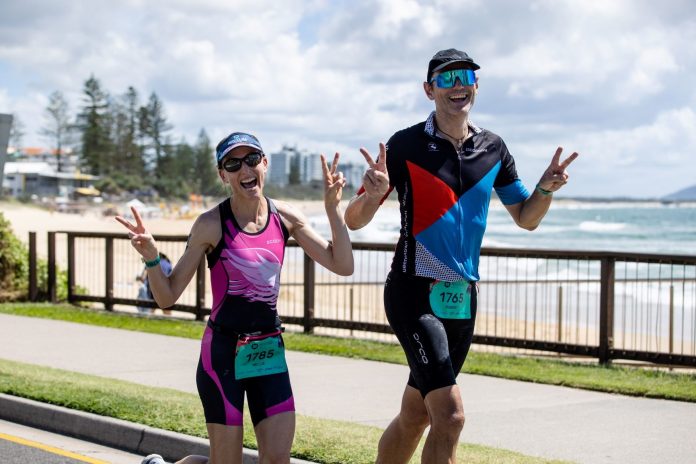 The Mooloolaba Triathlon is set to reach a milestone this weekend, when competitors from around Australia converge for its 30th anniversary.

Weekend warriors, rising stars and experienced racers will be among more than 5500 participants at this year’s festival, from March 11-13.

There will be some temporary changes to local roads. See Mooloolaba Triathlon – Changed Traffic Conditions for full details.

IRONMAN Group Oceania Managing Director Geoff Meyer said the event, which started in 1993 with about 250 contestants, had put a spotlight on the sport and the region.

“Over the past 30 years we’ve seen some incredible performances at the Mooloolaba Triathlon from our elite athletes, as well as tens of thousands of athletes experiencing the sport for the first time,” he said via an event press release.

“The triathlon is a celebration of what the Sunshine Coast has to offer – blue skies, crystal clear water, a welcoming community and an event that is synonymous with the triathlon community in Australia.

“For 30 years, the event has given people the opportunity to compete in a stunning destination as they swim in the tropical waters off Mooloolaba Beach, spin down the Sunshine Coast Motorway and run to the finish along the esplanade that stretches from one beautiful beach to another.”

“(It) demonstrates the importance of significant events to visitor economies,” he said.

“The triathlon has grown over three decades to generate more than $6 million (a year) in visitor spending for Sunshine Coast businesses.

“Accommodation and transport providers, cafes, restaurants and tourism operators all benefit from events like the Mooloolaba Triathlon.”

He said the event was perfect for athletes who also wanted to enjoy a holiday.

“The Mooloolaba Triathlon delivers the best of both worlds, the ultimate test of agility and endurance with a great choice of visitor experiences for athlete recovery.”

“Triathletes keep coming back here and new generations sign up each year, which suggests the overall experience must be highly regarded on the triathlon calendar,” he said.

Highlighting the event’s popularity was a band of Mooloolaba Triathlon ‘Legends’, who have completed the event for 10 years or more. There were more than 200 members.

Brisbane’s Brent Blackman, 50, has the most Mooloolaba Triathlons under his belt, completing 28 out of the 29 events and only missing the first staging.

“I don’t ever want to think I’ll get too old to do it. I’ve even got a T-shirt, because my mates know how much I love Mooloolaba, which has got ‘The King of Moo Tri’ on the back.

“My nickname is ‘The Duck’ because of the way I run and I have 28 little ducks on the back of the T-shirt for every race I have competed in.

“I love going up to Mooloolaba because it’s that one time I know I can go there and know that I’ve done more than anybody else. It’s a beautiful place to be and I love it.”

During the event’s early years, he was mistaken as a race leader.

He started his first run lap alongside professional Guy Andrews, who was on his second lap.

“The commentators thought I was actually challenging him for the lead,” he said.

“Us going side-by-side, the commentators were talking about it, the footage was of the two of us.

“But they soon realised that I wasn’t competing next to him and I certainly got cropped pretty quickly.”

Meanwhile, Brisbane’s Nicola Debuse will line up for her 18th Mooloolaba Triathlon, the most among female competitors.

She first completed the event in 2003.

“I really like the inclusive vibe and every competitor, quick or not, is cheered and the last ones probably get cheered the loudest,” she said.

Though the course has changed slightly over the years, Nicola said her love for the event endured.

“I love the new swim start and finish at the more protected southern end of the beach,” she said.

“The bike course is always fast on the motorway and the wind will be from behind either going out or coming back.

“The run is challenging, but where else can you run along the beautiful waterfront and be cheered on the whole way round.

The Mooloolaba Triathlon is supported by the Queensland Government through Tourism and Events Queensland and features on the It’s Live! in Queensland events calendar.